Public Entities Should Continue Online Meeting Access after the Pandemic

This report calls on more government entities in Louisiana to livestream and archive video recordings of their meetings online, so citizens can continue to enjoy the benefits of remote access as pandemic restrictions ease and in-person meetings resume.

During the COVID-19 pandemic, citizens gained new access to the meetings of many public bodies in Louisiana through temporary state authorization of meetings by video or teleconference. These virtual options have enabled more citizens to view or listen to the meetings, especially when the governments record and archive the meetings so citizens can access them anytime. Increased access online and on demand is important because most public bodies hold meetings during normal business hours when it is inconvenient or impossible for many citizens to attend.

As in-person public meetings resume, government entities can preserve the benefits of remote access with low-cost technology to livestream their meetings and provide an archive of video recordings online. BGR’s recommendation extends to committee meetings, where many public policy issues receive in-depth discussion and analysis. 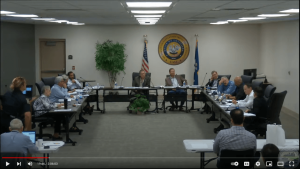 The Southeast Louisiana Flood Protection Authority-East (shown here in this YouTube screenshot of its July 15, 2021 meeting) is an appointed board that has livestreamed its meetings and maintained an archive of video recordings of them online.

But many other entities that make decisions with significant implications for residents and taxpayers did not provide livestreaming or online meeting recordings before the pandemic. These include four non-elected boards that levied a combined $230 million in local taxes in 2019: the Regional Transit Authority, the New Orleans Ernest N. Morial Convention Center, the Louisiana Stadium and Exposition District, and the Southeast Louisiana Flood Protection Authority-West. All four are subject to a 2013 Louisiana law requiring taxing entities with appointed boards to “video or audio record, film or broadcast live all proceedings in a public meeting.” All four entities told BGR they satisfied this requirement before the pandemic by making audio recordings of their meetings available to the public upon request. However, they did not post the recordings online.

During the pandemic, all four entities held meetings by video or teleconference. Once in-person meetings resume, Convention Center and RTA administrators told BGR they plan to broadcast their meetings live. Stadium District administrators said they have not decided what to do after the pandemic. Officials with the Flood Protection Authority-West said they are not set up to do livestreaming but would do so if required.

BGR urges these entities, and other public bodies not subject to the 2013 law, to enhance transparency and accessibility by continuing live remote access when in-person meetings resume. Doing so would embrace the spirit of an existing provision in Louisiana open meetings laws that allows government entities to video record and broadcast their meetings.

As an assurance, BGR also calls on the Louisiana Legislature, which livestreams and archives videos of its own meetings line, to expand open meetings laws to require online access to government meetings of all public entities. Entities with substantial responsibilities and public funding should livestream and archive video of their meetings, while an online archive of video recordings may be sufficient for entities with lesser responsibilities.

Click to read the full report: Public Entities Should Continue Providing Online Access to Meetings after the Pandemic.

Public Entities Should Continue Online Meeting Access after the Pandemic

OVERVIEW This report calls on more government entities in Louisiana to livestream and archive video recordings of their meetings online, so citizens can continue to enjoy the benefits of remote access as pandemic restrictions ease and in-person meetings resume. During the COVID-19 pandemic, citizens gained new access to the meetings of many public bodies in […]

OVERVIEW In this release, Handle with Care: Public Planning and Accountability Must Guide Spending of Federal Relief Funds, BGR offers guidance to government entities on harnessing the opportunities presented by unprecedented federal funding to spur recovery from the pandemic’s economic, fiscal and health impacts.

OVERVIEW As a nationwide search begins for New Orleans’ next inspector general, this report analyzes key components of the selection process and future oversight of the inspector general. It examines recent measures taken or proposed to improve each area and recommends additional improvements. Recent problems within the New Orleans Office of Inspector General (OIG), including […]

Overview On the Ballot: Jefferson Parish Inspector General Tax Renewal, November 3, 2020 is intended to help voters in the unincorporated areas of Jefferson Parish make an informed decision on whether to renew a 10-year, 0.5-mill property tax dedicated to the Office of Inspector General and the Ethics and Compliance Commission. While the tax is […]

Overview A Look Back to Plan Ahead: Analyzing Past New Orleans Budgets to Guide Funding Priorities reviews a decade of City General Fund budgets. It also lays a foundation for examining potential opportunities to reallocate revenue to critical needs.

Overview BGR analyzes a November 8, 2016 proposition that would amend New Orleans’ charter to allow for the permanent separation of the Independent Police Monitor from the Office of Inspector General.

A Step in the Wrong Direction on State OIG

This edition of Now looks at the recent move in the Louisiana State Legislature to defund the state Office of Inspector General.

Overview BGR examines charter amendments, tax propositions and state constitutional amendments on the October and November 2011 ballots. The October 22 ballot includes a Jefferson Parish charter amendment to establish the Office of Inspector General and an Ethics and Compliance Commission, as well as a related property tax to fund both entities. It also includes […]

Overview In On the Ballot: New Orleans, October 2008, BGR provides analysis and takes positions on two ballot propositions: one to issue bonds through the Sheriff’s Law Enforcement District for Orleans Parish criminal justice facilities and another to protect the newly created Office of Inspector General in New Orleans.

Overview In September 2006, members of the New Orleans City Council introduced an ordinance to establish an Office of Inspector General. Read BGR’s letter to the City Council as well as the version of the ordinance introduced on October 19 and the final version approved by City Council on November 2.

People were upset two years ago when the COVID-19 pandemic forced them to stay inside and mostly interact with others virtually. But since then, residents have acclimated to the convenience of having everything readily accessible online, including government meetings....

Celebrating Another Sunshine Week During the Pandemic

Sunshine Week (@SunshineWeek and #SunshineWeek) highlights our need to rebuild trust in public institutions. To accomplish this, we must promote access to public records, encourage lawmakers to be more transparent, and hold government accountable. At the heart of democracy...

One of the silver linings of the pandemic has been its effect on public meetings and our legal system. Because of limitations on persons gathering in close proximity, legislative and regulatory bodies ranging from congressional committees to town councils...

Our Views: Even in in-person era, public meetings should be more accessible remotely

During the pandemic, government, like everyone else, embraced the use of video conferencing platforms. Most public bodies are returning to business as usual these days, but that doesn’t mean we haven’t learned from the temporary disruption. The Bureau of...

NEW ORLEANS — From the Bureau of Governmental Research: BGR released a report today calling on more government entities in Louisiana to livestream and archive video recordings of their meetings online, so citizens can continue to enjoy the benefits...

The Bureau of Governmental Research (BGR) released a report today calling on more government entities in Louisiana to livestream and archive video recordings of their meetings online, so citizens can continue to enjoy the benefits of remote access as pandemic...

The Bureau of Governmental Research today releases Handle with Care: Public Planning and Accountability Must Guide Spending of Federal Relief Funds. This BGR NOW offers guidance to government entities on harnessing the opportunities presented by unprecedented federal funding to...

The board that recently ousted New Orleans Inspector General Derry Harper wants to open his old job to a broad slate of candidates and provide stronger whistleblower protections for the office’s employees. But the nonpartisan Bureau of Governmental Research...

The New Orleans City Council will soon consider easing some of the restrictions for applicants interested in becoming the city’s next inspector general. The Ethics Review Board, which oversees the independent IG’s office, seeks the changes to open their...

Even as it’s grown in popularity, I’ve never felt compelled to participate in early voting. I enjoy the ritual of walking to my local polling place, seeing neighbors and greeting the commissioners who show up year after year to...

The Jefferson Parish Inspector General’s property tax renewal, which is on the ballot Nov. 3, got the thumbs up from an independent nonprofit Tuesday, when the Bureau of Governmental Research announced its endorsement. The .5-mill, 10-year property tax that...

Today, the Bureau of Governmental Research (BGR) releases On the Ballot: Jefferson Parish Inspector General Tax Renewal, November 3, 2020. The report is intended to help voters in the unincorporated areas of Jefferson Parish make an informed decision on...

Read Part 1: Fulfilling the mission. The OIG faced a series of challenges beginning in 2015. While the Office remained highly productive and continued to release credible and well-respected reports, the cumulative effect of these challenges diverted attention from...

Citizens in Orleans and Jefferson parishes who plan to vote in tomorrow’s election can inform their decisions with three BGR reports: On the Ballot: Housing Tax Exemptions in New Orleans, October 12, 2019 examines Constitutional Amendment No. 4, which...

Today, BGR releases A Look Back to Plan Ahead: Analyzing Past New Orleans Budgets to Guide Funding Priorities. The report reviews the City’s General Fund budgets from 2010 to 2019, focusing on growth in revenues and changes in expenditures. As...

Today BGR releases Questions for a New Parish Council, the second in a two-part report series providing the views of candidates for Jefferson Parish government on important public policy issues. Yesterday, BGR released the responses of the candidates for...

Today BGR releases Questions for a New Parish President, the first in a two-part series of reports providing the views of candidates for Jefferson Parish government on important public policy issues. Tomorrow, BGR will release the responses of the...