The Excellence Factor: Pushing for Better Government and Honoring Those Who Achieve It 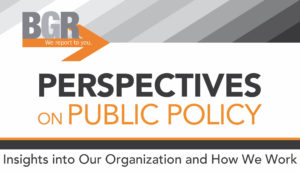 At the Bureau of Governmental Research (BGR), we work to understand how government can perform better. And we push for it.

We mine facts and data; apply laws, theories and established practices; challenge the status quo and create roadmaps to reposition government toward more effective results. We publish our findings and recommendations and work for implementation.

Our work is rooted in the hope that citizens and public officials will regard excellence as the standard for government performance – and then reach for it.

We know firsthand that changing public policy is a heavy lift. It takes time and commitment, often over years and sometimes over decades.  It requires extraordinary effort by a cross-section of people. Often the process starts with civic leaders and citizen advocates who are inspired to carry the message of policy reform to a broader audience.  And if the process is successful, it ends with public employees who identify, produce and deliver new and better ways of providing government services.

Pressing for excellence in government is at the core of BGR’s mission as a public policy research organization. But it is only fair that we pause periodically to honor individuals who actually improve the quality of government through outstanding performance and creative problem-solving.

We have done this for more than 25 years. Through our biennial Excellence in Government Awards program, we honor public employees and private citizens who find and implement solutions to challenges facing state and local government in the New Orleans area. Most of these people increase the efficiency and effectiveness of government quietly and out of the limelight. Their commitment to public service is genuine.

We rely on the public to let us know about these unsung heroes. Nominations are open for the 2020 Excellence in Government Awards. BGR invites you to consider nominating someone you know.

Anyone Can Submit a Nomination

Public participation in the nomination process is critical to the success of the program. Please note that the February 14 deadline for submitting applications is fast-approaching.

The nomination form is on our website. The form provides details on the nomination process, the type of information to include about nominee accomplishments and impact, and how to submit the nomination. There are four award categories:

Past Honorees Define Excellence in Government

As in previous years, we are looking to the public to nominate people who challenge existing practices and deliver improved government services in innovative and resourceful ways. Here are some examples of past Excellence in Government honorees:

In 2018, Ashleigh Gardere, Executive Vice President & Chief Operating Officer of the New Orleans Business Alliance, received an Excellence in Government Innovation Award for her work to improve citizens’ access to quality workforce development programs in New Orleans. One of her innovations, STRIVE NOLA, provides job readiness training to the most disadvantaged job seekers, including the long-term unemployed and individuals re-entering society from prison. Ms. Gardere also led the expansion of the initiative to other local workforce training providers. 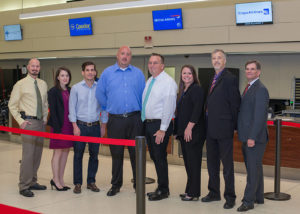 In 2018, a team of New Orleans airport employees were recognized with an Excellence in Government Merit Award for work to recruit and retain new flights and airlines at Louis Armstrong New Orleans International Airport. The team attracted flights to 15 new destinations in 2016 and 2017, including the first trans-Atlantic flights since the 1980s. The team also improved marketing, ticketing and other systems to improve passengers’ experience and help new flights succeed.

Manuel Aspuria, Operations and Maintenance Manager at the Jefferson Parish Department of Drainage and Pump Stations, received the Lifetime Achievement Award in 2016 for his career efforts to make Jefferson Parish safer during storms and for providing an inspiring example to the rest of the Department of Public Works. Proficient in the operation and maintenance of the more than 180 pumps in Jefferson Parish, he saved the public hundreds of thousands of dollars over the course of his career by making repairs himself rather than outsourcing work.

BGR presented the 2018 Citizenship Award to two distinguished early childhood advocates, Revia Ellis and Carol Wise, for their work to improve the quality of government.

Ms. Wise, a champion of early childhood education for many years at the local and state levels, helped to found Women United in 2002. When Hurricane Katrina destroyed childcare centers across New Orleans, Ms. Wise and Women United raised funding to rebuild the centers. In an effort to rebuild them better, they pushed the State Legislature to adopt their proposal for a childcare quality rating system, succeeding in 2007. The 12 centers that received United Way funding for rebuilding all earned four or five stars under the new system, demonstrating how policy could drive performance.

Excellence in Government: One of BGR’s Proudest Traditions

The honorees mentioned above are just a few examples out of more than 150 awards given since the program debuted in 1994, and we’re excited to continue the Excellence in Government Awards into the new decade. BGR is dedicated to informed public policy making and the effective use of public resources for the improvement of government in the New Orleans metropolitan area. The Excellence in Government Awards motivate achievement in the public sector and engagement by private citizens in ways that make government work better for the citizens and businesses of greater New Orleans. This aligns perfectly with BGR’s mission and purpose. Learn more about us on our website, and please consider nominating someone today.

We are grateful to our sponsor, Canal Barge Company, Inc., and to our BGR members for supporting our efforts to improve government in greater New Orleans. We will recognize the 2020 Excellence in Government honorees at an event in the spring.

This article is part of BGR’s Perspectives on Public Policy series, which features insights from BGR team members about the organization and its work in the metropolitan New Orleans area.