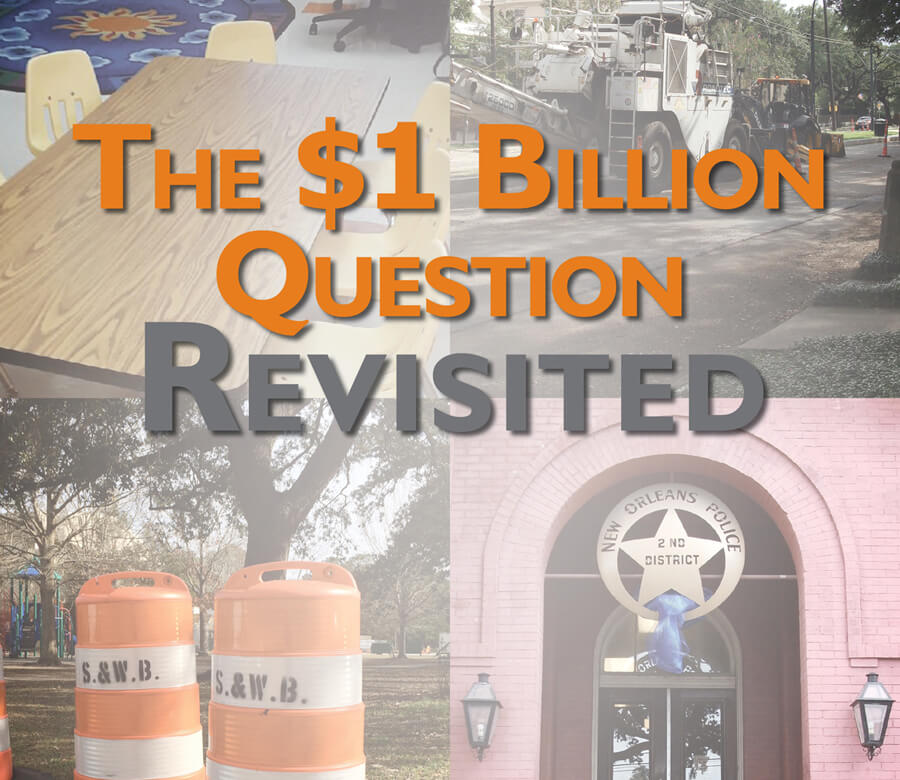 Four years after calling for a comprehensive review of New Orleans’ tangle of tax dedications, the watchdog Bureau of Governmental Research has a new report that points out officials have done little to fix the problem.

The nonprofit published a report in 2015 called “The $1 Billion Dollar Question: Do the Tax Dedications in New Orleans Make Sense?”It centered on the conclusion that no, they largely do not. Taxpayers in New Orleans over the years have voted to divide their property taxes into a raft of categories mostly aimed at preventing elected officials from exercising discretionary spending.

Mayor LaToya Cantrell is calling on state lawmakers to change how tourism tax revenue is dedicated in New Orleans to find more resources to address the city’s infrastructure issues. She’s also backed a reworking of the Audubon Commission’s dedication into a new split millage that would support parks and recreation more broadly. Voters will consider that proposal May 4.

In the meantime, BGR is stressing the need for a broader look at New Orleans’ tax structure.

“Policymakers have not yet conducted the comprehensive review of tax dedications that BGR recommended,” the report said. “In addition, the City has made only limited progress in funding critical needs, and it did so primarily through new taxes and general fund allocations rather than rededication of existing taxes.”

The message throughout the report is clear: New Orleans has high-priority needs, especially fixing its streets and drainage system. Yet the city has not yet looked at whether it makes sense to reroute revenue going to less pressing matters.

The report points out that if a tax dollar is not well spent, it takes away from critical needs. New Orleans’ urgent needs are “so great that it may be impossible to adequately address them all,” BGR acknowledges.

Ultimately, any changes made to the city’s web of tax dedications would need voter approval. The most recent new tax dedication proposal was for elderly service and was soundly rejected in March after Cantrell urged its defeat.

Most critical needs that have seen expanded funding have received it from new taxes and fees, rather than diverting revenue from other sources, BGR wrote. To address chronic infrastructure problems, Cantrell is asking the Louisiana Legislature to allow New Orleans to capture a larger share of hotel tax revenue that currently benefits the tourism industry.

She also wants a one-time $75 million payment and has eyed the Morial Convention Center’s $230 million reserve account as a likely source for that money. Tourism leaders oppose the mayor’s plan, saying the tax money is allows them to secure events such as the Super Bowl, Final Four and Essence Festival along with the recent British Airways flight to New Orleans.

Since BGR’s last report, voters in Orleans Parish have approved six new local taxes or tax increases, generating about $33.2 million. That includes 8.46 mills of property tax for the Orleans Parish Sheriff’s Office, the firefighters’ pension system, the city library, and debt service on bonds and maintenance for the Lakefront Airport and South Shore Harbor Marina. There’s also a one-quarter cent sales tax in the French Quarter to pay for beefed-up security.

“Looking beyond the legislative session, the city should develop a comprehensive, long-term plan for funding high-priority needs,” BGR concludes. “This should include reevaluating the city’s current spending priorities. If city tax revenues continue to grow at a rate that exceeds inflation, the plan should direct a portion of this growth to critical needs.”