BGR earned the award for Most Distinguished Research for its 2019 report The Lost Penny: An Analysis of the Orleans Parish Hotel Tax Structure. The report presented a comprehensive picture of the sources and uses of $200 million in hotel tax dollars in Orleans Parish. It focused primarily on the share for the City of New Orleans, which had a 1% hotel tax suspended by state law for more than 50 years. This “lost penny” of hotel tax deprived the City of $12.3 million a year. The report also compared the Orleans Parish hotel tax structure to best practices for taxation as well as state and national norms. In June 2019, consistent with BGR’s recommendation, the Louisiana State Legislature ended the suspension of the tax, effective July 1, 2019. Click here to read The Lost Penny. 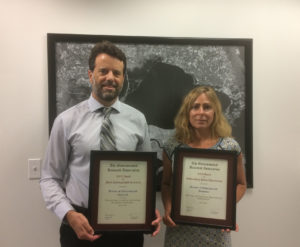 BGR also received an Outstanding Policy Achievement Award for its work to improve the Jefferson Parish School Board’s employee pay raise tax proposition. Jefferson Parish Public School System officials used BGR’s criticisms of their failed 2017 attempt at a pay raise tax to rethink their proposal. They returned in 2019 with a more strategic, cost-effective tax proposal that earned BGR’s and voters’ support.  The new tax will help the School System meet its highest-priority personnel needs. Click here to read BGR’s On the Ballot: Jefferson Parish School Tax Proposal, May 4, 2019 report that describes the new tax and compares it to the 2017 proposal.

The GRA was established in 1914 as the national organization for governmental research professionals, and it has presented BGR with more than 40 awards throughout its history. These awards have recognized BGR’s distinguished research, effective citizen education, distinguished service, research presentation and policy achievements. This is the 13th year in a row that the GRA has recognized BGR’s work, and the seventh year in a row that BGR has received an Outstanding Policy Achievement award.

BGR President & CEO Amy Glovinsky thanked the GRA for honoring BGR’s work. “These awards acknowledge the high caliber of public policy research and analysis BGR delivers to our community. They also recognize that in-depth, independent research can point the way more efficient, effective and accountable local government. We are thankful to the GRA and its member organizations nationwide for recognizing BGR with these awards,” Ms. Glovinsky said.

Click here for a PDF of this news release.