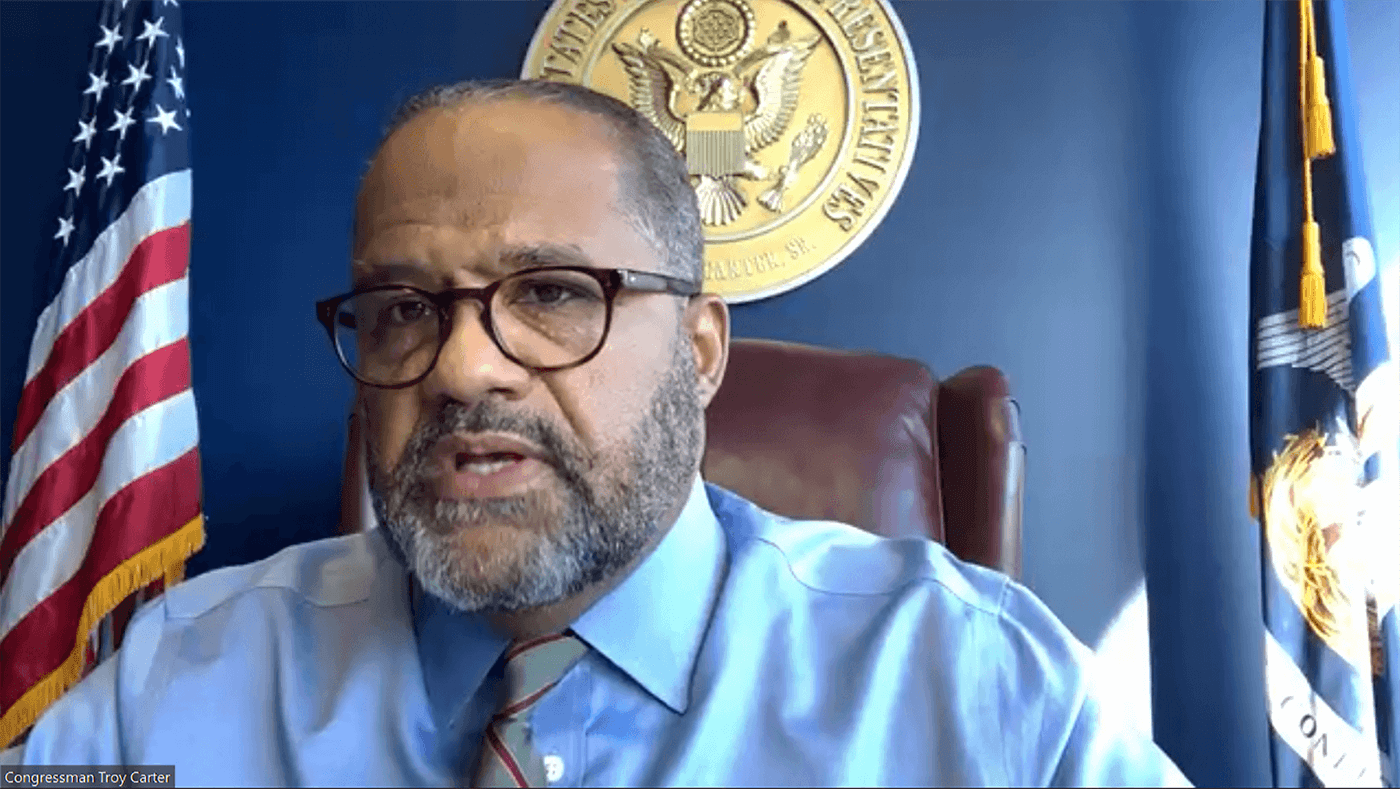 Viewpoint: ‘We are one Louisiana … and have to act that way,’ says Congressman Troy Carter

In wide-ranging, almost hour-long remarks on Wednesday (Aug. 18), U.S. Rep. Troy Carter — who has yet to serve 100 days in office — touched on issues from the pandemic to the American Rescue Plan Act, the Child Tax Credit and support for small businesses. Throughout the Zoom speech to the Bureau of Governmental Research, he emphasized that common sense solutions can make a real difference.

“I want to be that bridge of reasonableness,” the New Orleans Democrat told the BGR. “When you’re building relationships, it’s policy over politics, people over politics.”

Carter said that Louisiana does not have the luxury of divisiveness. “We need to concentrate on things that bring us together — education, infrastructure, health care, safety, flooding. These issues aren’t political, they aren’t partisan. We are one Louisiana, one America — and have to act that way. I wake up every day with that effort in mind.”

Addressing the pandemic, he said he is willing to fight for more federal resources such as the disaster strike teams, like those deployed after a hurricane, that are now helping at Our Lady of the Lake Hospital in Baton Rouge.

“We’ve all felt the fear, uncertainty, disappointment, exhaustion and, tragically, grief that this virus has brought to our community. Now we face yet another difficult wave of cases here in Louisiana, in large part due to the delta variant and our low statewide vaccination rate,” he said. Louisiana has the fourth-lowest vaccination rate per capita in the entire country, Carter noted.

“And now our beloved state is setting records in the worst possible way,” he continued. “Hospital beds are full. Health care workers are exhausted. Neighborhoods, kids and the elderly are dying. We cannot allow ourselves to become numb to this tragedy.”

Carter said there is one significant difference between last spring and now — the tools needed to save lives. “Vaccines are our way out of this pandemic. Every shot in an arm is a step towards a future that is not constrained by this virus. And for those who can’t get vaccinated, or who aren’t yet, masking up is the best way not just to protect your neighbors, but to protect yourself and your families from this deadly virus,” he said. “Vaccines, masks and physical distancing aren’t attacks on our freedom. They should be our north star. They are the precious tools we have to keep each other safe.”

Carter said he believes that, throughout these difficult times, there have been many instances of the community coming together to help one another —  from food drives to celebrations of our brave health care workers.

He has seen that same feeling of community in Congress, too, especially with the passage of the American Rescue Plan, which he called a “transformative infusion of funds into the national recovery during this unexpected, and unprecedented, moment.” Carter felt “saddened” that this extraordinary moment didn’t spur his colleagues and friends on the other side of the aisle to “bridge partisan lines for the sake of the people” and vote in favor of the American Rescue Plan.

“This legislation has been a lifeline for so many Americans. I’m glad to be in Congress to support its implementation. In a time of uncertainty, the American Rescue Plan provided some valuable aspects of certainty,” Carter said.

Carter called the ARP’s Child Tax Credit “the most important initiative to end child poverty since the 1960s.” Every family with kids under the age of 18 receives $250 to $300 a month per child, no strings attached.

Carter said he has been hosting town halls to help get the word out about this program and had another telephone town hall on this topic Tuesday night. A constituent said on the call that she plans to spend the funds on school supplies and school uniforms and was used to sacrificing to get what her children needed.

“Hardworking Americans should not have to sacrifice to buy school supplies. That’s not the way things should be. The Child Tax Credit will help. Black, White, Republican, Democrat — it’s an American thing, not a party thing. It’s a Louisiana thing, not a political thing,” he proclaimed.

Carter’s Second Congressional District begins in New Orleans and wends its way along the Mississippi River to Baton Rouge.  A stunning 90.2% of children in his district will gain from the expanded and improved Child Tax Credit — 162,000 children. The average annual benefit for 44,600 households is $3,200. Families with children in poverty will receive $5,100 on average.

By Carter’s estimates, the Child Tax Credit will lift 22,700 children in the Second Congressional District out of poverty. “This will have a lifelong impact on the health and well-being of these kids and end the cycle of poverty,” he said.

He urged anyone with kids under 16 who hasn’t received two Child Tax Credits payments to call his office for assistance. Carter also reminded listeners to be on the watch for scammers. The IRS is the only agency disbursing the payments, and they do not typically contact beneficiaries, he said.

The ARP looks at health care holistically and works off of the value that, in a pandemic, health care should be more affordable than ever. Now 31 million Americans have coverage through the Affordable Care Act, with more than 1 million new people enrolling since Democrats lowered premiums in February. The ARP lowered premiums for 9 million Americans who buy their coverage through the Affordable Care Act. “This saves families an average of $50 per person, per month. That’s a big deal,” he proclaimed.

The median deductible for Americans signing up for new coverage on HealthCare.gov has dropped by nearly 90% from $450 to just $50. The ARP also sent funding directly to community health centers in Louisiana — over $95 million. “Community health centers serve some of the most underserved and underinsured communities in our area,” he said. “Investing in them is an effective way to combat persistent health inequities — an effort that is more important now than ever during this pandemic.”

Carter said he will work to ensure that the citizens of his district will have access to every single tool provided for the economic recovery from ARP. “My door is always open. Even during these times, my virtual door is always open,” Carter said. “However, we have other opportunities to do great things for the American people, and for New Orleans.  I hope my colleagues will get on board to help move our community toward recovery.”

On Monday (Aug. 16), Carter attended the opening of Delgado Community College’s new Advanced Technology Center in Algiers’ Federal City neighborhood. “This facility is proof that bringing the energy of the entire community together will bring the needed resources to ensure the region’s economic success in the 21st century,” Carter said. “Learning is a lifelong endeavor, and this center is a commitment by the community to train students not only for the careers of today, but the careers of tomorrow.”