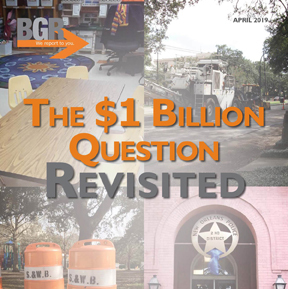 Members of the New Orleans City Council on Thursday initiated the process to renew a quarter percent sales tax in the French Quarter that has funded Louisiana State Police patrols in and around the French Quarter for the past five years. The council members were meeting as the governing authority of the French Quarter Economic Development District.

State troopers have been patrolling the city since 2014, when a shooting on Bourbon Street left one dead and nine injured. The following year, then-Mayor Mitch Landrieu proposed the tax as a permanent funding source to keep the State Police in the city. In October 2015, voters within the newly created French Quarter Economic Development District approved the tax. The state police have since set up a special troop — Troop N — that exclusively works to police the French Quarter.

That tax expires at the end of the year. And on Tuesday, the district announced its intention to call another election to renew the tax on Dec. 5. The tax brought in $3 million in 2019, according to local watchdog group the Bureau of Governmental Research.

The revenue from the tax, however, doesn’t have to go to State Police troopers. It only has to be used for public safety initiatives. City officials are now considering reallocating the funding from the State Police presence to the French Quarter Task Force — a patrol of off-duty NOPD officers that was originally created by local investor Sidney Torres.

There have been mixed reviews about the State Police presence since they became a French Quarter fixture in 2014.

“There has been a lot of conversations and dialogue currently on the accountability of these monies,” Councilwoman Kristin Palmer, who represents the French Quarter, said on Thursday. “There were significant issues in the previous administration in terms of accountability for these dollars.”

The program has faced criticism in recent years. In 2018, a legislative auditor’s report said the State Police failed to document how it used $2.4 million meant for French Quarter patrols. Last year, WDSU reported that New Orleans paid for over $1 million in overtime for state troopers in 2018.

There have also been questions about whether it is wise to have State Police operating in New Orleans, since they aren’t beholden to a long-running federal consent decree over the New Orleans Police Department, meant to bring the department into constitutional compliance. The consent decree was approved by a judge in 2013, and requires a host of accountability measures and policing restrictions. Those rules haven’t been applied to the state troopers operating in Orleans Parish.

One difference between NOPD and state police protocols that has gotten local media attention is related to high-speed pursuits. The NOPD is barred from engaging in high-speed pursuits unless a suspect is considered an immediate danger, and then only with permission from a supervisor.

But the State Police have repeatedly engaged in high-speed pursuits in New Orleans, sometimes with disastrous results. In one case, a high-speed pursuit by a state trooper — that began with a traffic stop over an allegedly stolen license plate — ended with a fiery crash of the fleeing vehicle, resulting in the deaths of two men and a toddler.

The crash killed one of the men and the child, two-year-old Ivory Washington, according to The Times-Picayune. The driver — Washington’s father — survived the crash, but shot himself while still sitting in the car shortly after the crash. (NOPD officers have also been involved in high-speed chases in violation of departmental policy. In one case from last year, a pursuit in Broadmoor ended in a crash that caused a fire, killing three. Four officers were fired as a result.)

In an interview last year, New Orleans’ Chief Administrative Officer Gilbert Montaño told an Albuquerque publication that the State Police’s exclusion from the consent decree, and the fact that most troopers came from rural areas and were unaccustomed to patrolling cities, presented challenges.

“Over time that certainly was an obstacle and challenge that had to be blended and worked through,” Montaño told the publication.

He said, however, that it was “a good short term solution” in the face of NOPD officer shortages.

During the meeting, Palmer complimented a different supplemental police force, the French Quarter Task Force — a patrol of off-duty NOPD officers that is probably most recognizable for the Smart Cars used for patrols. Palmer’s chief of staff, Andrew Sullivan, told The Lens that there was active discussion about rerouting some of the sales tax revenue to fund the task force, instead of using all of it for State Police troopers.

“I’d like to also publicly state that the task force has been very successful, the security task force in the French Quarter, because they do use constitutionally trained NOPD officers and it has been very successful with high accountability,” Palmer said on Thursday. “There is some conversation on how to restructure some of the security issues within the French Quarter moving forward.”

Sullivan stressed that the French Quarter Task Force is not the same as the NOPD task forces that have come under scrutiny in recent months over questionable stops and searches and lax oversight.

The French Quarter Task Force is controlled by the French Quarter Management District, a public body created by the state. The Director of the district, Karley Frankic, submitted a public comment on Thursday, bolstering the positive impact of the task force, also known as the supplemental police patrol program, or SPPP.

Although thousands of New Orleans residents work in the French Quarter and are thus affected by the vote, only French Quarter residents will get a vote on the tax renewal. The resolutions state that the council will meet again on August 20 to take a final vote on the ballot language. That language, if passed, would appear on the Dec. 5, 2020 ballot, according to the resolution.